We perceive light visually but light can also be perceived in the form of energy since approximately half the energy we receive from the sun is transmitted through light. Solar radiation represents only a part of the full spectrum of electromagnetic waves.

As glass is permeable to the entire spectrum of electromagnetic radiation, the aim is to allow for the highest possible light transmission while containing the influx of solar energy. 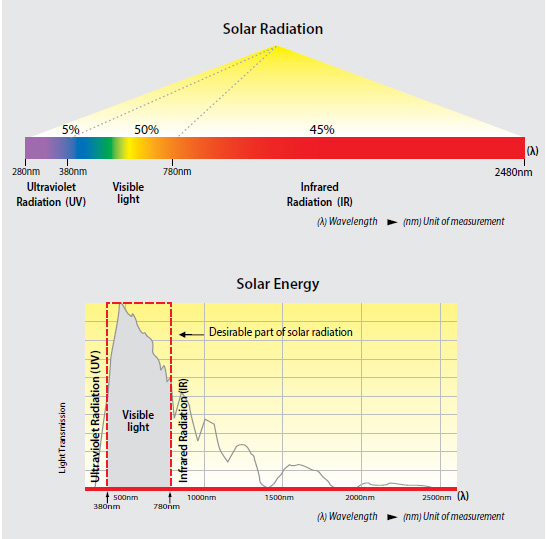 The sun can excessively heat-up the interior of a building with wide openings. Heat, in the form of solar energy - through its absorption by the glass- is both directly transmitted and indirectly transferred in the interior space. The amount of incoming solar energy depends on the location and orientation of the façade. The energy is diffused on the walls, floors, and furniture, which partially absorb it and then heat up.

The interior finishings return this heat in the form of long-wave infrared radiation (IR) which causes the interior temperature to rise gradually, leading to a greenhouse effect. The greenhouse effect is desirable in both residential and public buildings where energy costs remain high during the cold periods of the year, since it saves energy due to the free solar heat.

When glazing is hit by the sun’s rays, approximately 50% of Incident solar radiation is visible light and 50% is infrared (IR) and ultraviolet (UV) radiation.

Depending on the type of the glass pane:

A fraction of the incident solar radiation is reflected outwards.

A fraction is absorbed by the glazing, which heats-up through the process.

A fraction is directly transmitted in the interior space through the glazing.

The absorbed radiation is emitted back both to the interior and exterior of the building in the form of longwave infrared radiation.

The above energy fractions are interdependent, whereby a decrease in one results in the increase of the others, and vice versa.

This email address is being protected from spambots. You need JavaScript enabled to view it.